Railway construction for the installation, roofing and function of new under floor lathe to the engine room to Saint Ioannis Rentis

The project has been concluded and it is been delivered to Hellenic Railway Organization for usage.

The works include the contracted article of the project, and concern:

More specifically, the executed works were:

The project was concluded and the railway lines and the building were delivered for usage within the approved timetables.

During the construction the appropriate coordination took place which resulted to on time fully qualitative completion of the project. 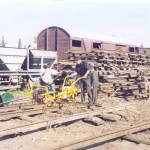